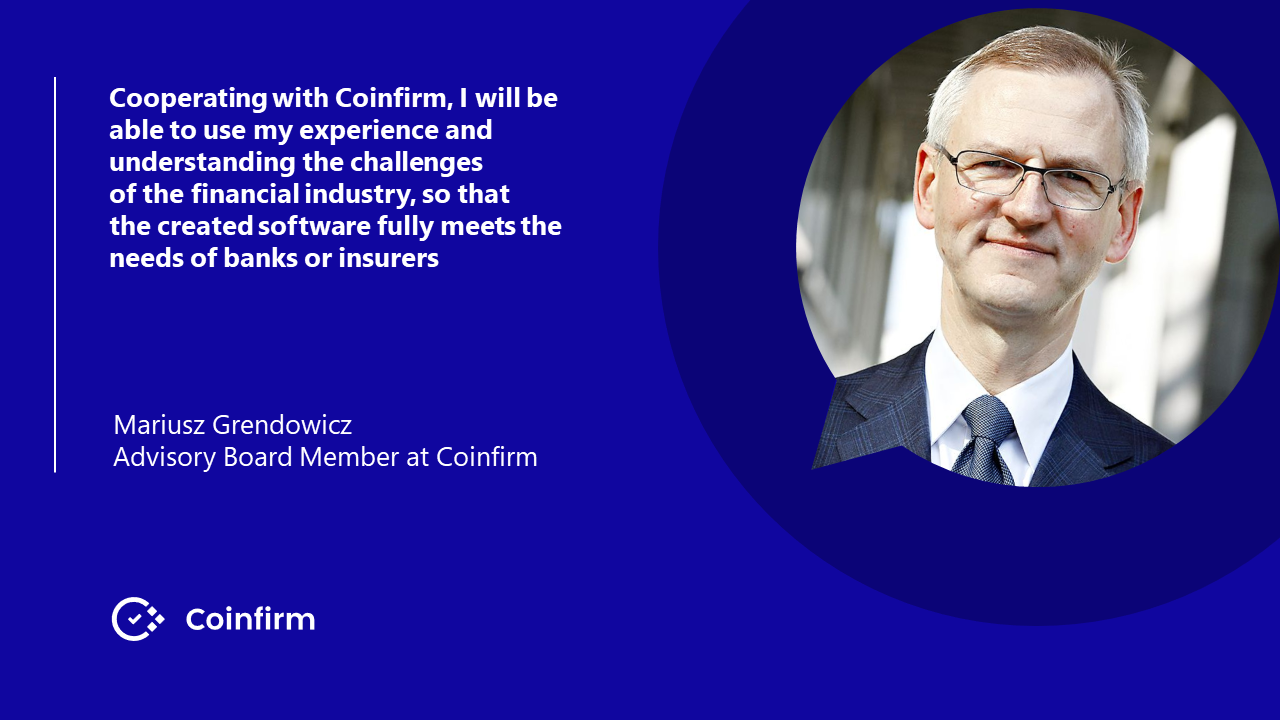 Former CEO of mBank and PIR SA (Polish sovereign wealth fund) and a member of Supervisory Boards of such companies as Aviva, and MCI will support Coinfirm in creating solutions for banking, insurance and financial services using blockchain technology.

Mariusz Grendowicz joined the team of Coinfirm’s advisory board, a global leader in the Fintech industry in the field of AML / KYC solutions (counteracting money laundering) based on blockchain technology.

He is one of the most experienced Polish managers in the financial industry, having on his account managerial positions, among others President of mBank – globally ranked No. 1 in the field of electronic banking according to Forrester Research, as well as the vice-president of BPH, or the President of the Polish branch of ABN AMRO. He is also an extremely experienced member of supervisory boards working with the largest Polish and international organizations - including Aviva, WWF, MCI (the largest fund financing digital transformation in the CEE region), GTC, or Getin Noble Bank. In total, Mariusz Grendowicz has over 35 years of experience in the financial industry and supervisory boards of large enterprises.

From the very early stage Coinfirm has developed a very strong advisory board, which now include:
-  Ruth Wandhofer, Global Managing Director at Citigroup, Regulatory, Market & Innovation Strategy.
-  Julian Johnson, former Global Head of Sales and Executive Vice President in top enterprise software businesses such as SAP, Oracle or Microsoft
- Joey Garcia, Senior Partner at a law firm Isolas recognized as one of the 12 best blockchain lawyers in the world by Chambers and Partners for helping shape the regulatory environment.
- Harry Saito, former KPMG Executive Director and for many years executive at Bank of Japan
- Hazem Danny Al Nakib, an expert in the areas of ICO, strategy, and financing of the technology firms. Except for many ICO and blockchain projects he was advising to organizations such as BCG or Royal Bank of Canada.

In June John Dembitz was appointed the Chairman of the Advisory Board. John started his career at McKinsey and was the CEO of the strategic communications firm before he builds his own firm in this space, which he later sold to Deloitte. For the past 20 years, he was the Chairman and Non-Executive Director in various businesses, NGOs, and industry associations.

Coinfirm is constantly strengthening competences in the area of creating solutions for financial institutions related to compliance challenges, such as AML / KYC or a durable medium. Cooperates, among others with the PKO BP bank on the implementation of the Trudatum platform, enabling automatic registration and verification of documents issued by the bank using blockchain technology, as well as international banks, stock exchanges, and companies of widely understood financial services

"Our solutions are a response to the increasing compliance challenges facing the financial industry, for example regarding the introduction of a so called durable medium or meeting the requirements of AML procedures. Thanks to Mariusz Grendowicz's extensive knowledge and experience in managing and supervising the largest financial institutions, we will be able to create products that are better adapted to the realities of the financial industry and implement more and more solutions based on blockchain technology, which will allow these organizations to increase the security and transparency of the services provided

The financial service industry is a subject to constant changes, caused, among others, by the dynamic development of FinTech companies, as well as evolving legal regulations. New technologies - like blockchain - they can be the solution to many of these challenges. Cooperating with Coinfirm, I will be able to use my experience and understanding the challenges of the financial industry, so that the created software fully meets the needs of banks or insurers

About Coinfirm
A global leader in the areas of RegTech, compliance, and analytics, developing the AML / CTF platform. It ensures transparency and security of blockchain transactions, reducing transaction risk in financial systems. The AML / KYC platform with a network based on AMLT tokens creates a safe environment for operating cryptocurrencies. Coinfirm is also the creator of Trudatum - a tool used to verify and authenticate documents, also based on blockchain technology, which has been recently implemented at PKO BP, the largest bank in Central Europe.