Tezos and XTZ now have AML compliance solution through Coinfirm

One of the largest roadblocks for the growth of blockchain protocols and cryptocurrencies in the global regulated market has been focused on AML compliance regulations. AML has become a required feature for protocols and related assets who want a leadership position in the market and the  capability to operate in regulated markets globally.  AML compliance solutions ensure that governments, financial institutions, and consumers can rest assured their transactions are not exposed in any way to illicit or illegal behavior.

Coinfirm has built its reputation as a leading AML, analytics and RegTech solutions provider for blockchain and cryptocurrencies. As of today, Coinfirm has integrated Tezos into the Coinfirm AML Platform and will be applying its 200+ proprietary algorithms and 300 risk scenarios to analyze risk on the protocol. Now, any entity from cryptocurrency exchanges or financial institutions that interact with Tezos can fulfill AML guidelines. They will also have access to a full suite of AML compliance solutions with real time transaction monitoring, AML risk reports, investigatory tools, case management and more.
Roman Schnider, CFO and Head of Operations at the Tezos Foundation: “Coinfirm’s industry-leading AML compliance product provides a must-have tool for banks and other regulated financial players that store or issue value on the Tezos blockchain,” 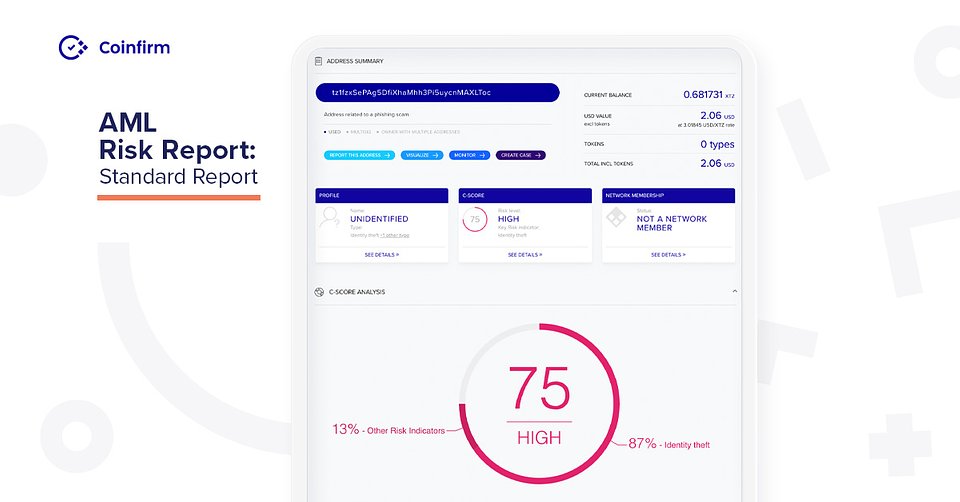 Tezos is already well positioned as an ideal long-term solution for high-value financial applications with fundamental features like a Proof-of-Stake consensus algorithm, on-chain governance, and the ability to facilitate formal verification of smart contracts. Coinfirm’s AML and transaction monitoring will further add to the security and usability of Tezos for businesses, governments and individuals.

Coinfirm’s CEO and Co Founder Pawel Kuskowski:
“Tezos has set itself in a leadership role by providing their protocol and related users and businesses the long term capability to operate and thrive globally in regulated markets. This will help push Tezos’ growth and adoption and we look forward to working with them further”Now, all Coinfirm AML Platform users such as cryptocurrency exchanges, custodians, or financial institutions are capable of actively using Coinfirm’s tools for Tezos and XTZ. The integration of Tezos into the Coinfirm AML Platform adds another protocol and additional blockchain assets to their market leading coverage of almost 1,500 different coins, tokens, and protocols.About Tezos
Tezos is a decentralized, public blockchain that evolves by upgrading itself. Stakeholders of the Tezos network vote on amendments to the protocol to reach social consensus on proposals, creating a secure and organic upgrading mechanism. The protocol’s on-chain governance system, Proof-of-Stake (PoS) consensus algorithm, and ability to facilitate formal verification of smart contracts, make Tezos an ideal long-term solution for high-value financial applications such as digital securities. Tezos is fully decentralized and it is the role of the Tezos
About CoinfirmCoinfirm is a global leader in AML and regulatory technology for blockchain and cryptocurrencies. It offers the industry’s largest blockchain coverage, supporting over 1,400 cryptocurrencies and protocols including Bitcoin, Ethereum, Hyperledger, and many more. The Coinfirm AML Platform is used by market leaders globally, ranging from crypto exchanges such as Binance and protocols like XRP to major financial institutions like PKO BP. The company’s services also include compliance investigations in partnership with Kroll, as well as Trudatum, a standalone platform that allows any file to be registered, signed, and verified with 100% accuracy. For more information, visit https://www.coinfirm.com/